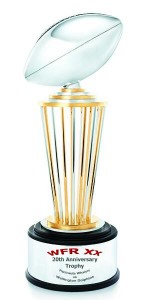 The 20th Season of Worldfantasyrugby (WFR ) has got underway today at Lancaster Park in Christchurch , New Zealand with Foundation Club the Wellington Dolphins playing WFR Powerhouse and 5 Time WFR World Club Champions the Peninsula Whalers , for the special one-off trophy commemorating the start of 20th Season and also as an added bonus the teams are playing for the Ocean Cup played for every-time these two sides meet.

The Whalers are the current Ocean Cup Holders.

This season we shall see a myriad of Pre Season Matches cover all the continents and we welcome back the International Tours that will see WFR New Zealand embark on a Grand Slam Tour of the UK , the WFR British Lions touring the America’s our full Conference Season and culminating the Season with the 11th WFR World Cup in New Zealand as the Kiwi’s look to be the first to Country to complete a Hat-trick of World Cup victories.

2o Season’s makes this competition now the longest running Rugby Management Game on the internet and with the advent of WFR TV we now bring the teams to life.

We now look forward to a season of celebration’s of our great game and we are sure it will not be to long before we see our 20th World Club Champion and our planning for the Big Anniversary of our 20th Year in operation in 2016.